Begins research into a symbolic and liturgical Art d’Eglise:

« As an artist and a Christian, I wanted my artwork to serve the Church I had discovered. I set out to develop what I called Art d’Eglise. Time and again, almost simultaneously, at the French monument museum and after whole days exploring miles of arches, apses and naves and standing before porches, I discovered Romanesque symbolism. »

The liturgy and unique preaching practices of the Saint-Séverin parish he attends reveal the essence of this tradition.
While reading Theophilus’s Schedula in the French National Library, he finds detailed technical instructions on the murals painted by 11th century Cluniac Monks and asks a chemist friend to find modern equivalents to the paints used at that time.

Despite Dominican rejection of this type of religious art and the hesitation and hostility of some members of the clergy and of Diocesan religious art councils, priests in Zillisheim, Mulhouse and Landser ask Sahuguet to paint the walls of their churches. Increasingly tough opposition, however, forces him to abandon already planned projects.

In December 1965, after suffering a heart attack, Sahuguet decides to abandon Art d’Eglise. In 1966, he writes a testament to his explorations: “A la recherche d’un Art d’Eglise”, published by Philippe Néri – Saint-Séverin, and takes up easel painting again. 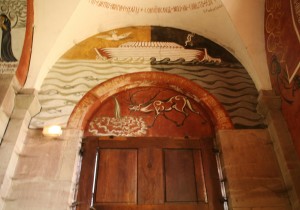 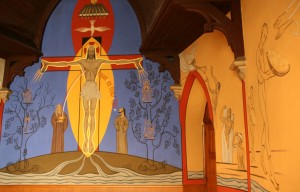 1956: Retable of the Dominique Savio Chapel in Landser (Haut-Rhin).